Following its return to 1986, the Collector Time Machine sets its dials for 1987, spots Peak Junk Wax dead ahead, and turns the eff around as fast as possible! You can’t control the overshoot with such emergency maneuvers, so nobody panics one bit when the Time Machine finds itself in 1979, home of the “We Are Family” Pirates team, the Thurman Munson plane crash, and Dave Parker’s monster All-Star Game throw to the plate. It’s a year many collectors regard as forgettable, but at least it’s not 1987!!

With 1978 squarely under my belt, I was now a professional collector. I knew how this stuff worked and what to expect: all-stars, team cards, checklists, all-star rookies (or not!), record breakers, etc. I had also studied my 1978 card backs enough to know exactly who the games best players and biggest stars were, and my frequent trips to the library taught me where these players stood in comparison to the record books and retired stars of the past. Thanks to “This Week in Baseball,” I also got to watch highlight and interviews beyond just the Dodgers/Angels road games my local channels would show.

The one subset I couldn’t have expected but immediately fell in love with was the “All-Time Record Holders” set. This really brought the Hall of Famers I’d read about to life while also giving me a chance to own “real” cards of immortals like Ty Cobb and Walter Johnson. (I would not have guessed that in less than 40 years, almost half the records on the cards–probably ALL the breakable ones–would be broken.) 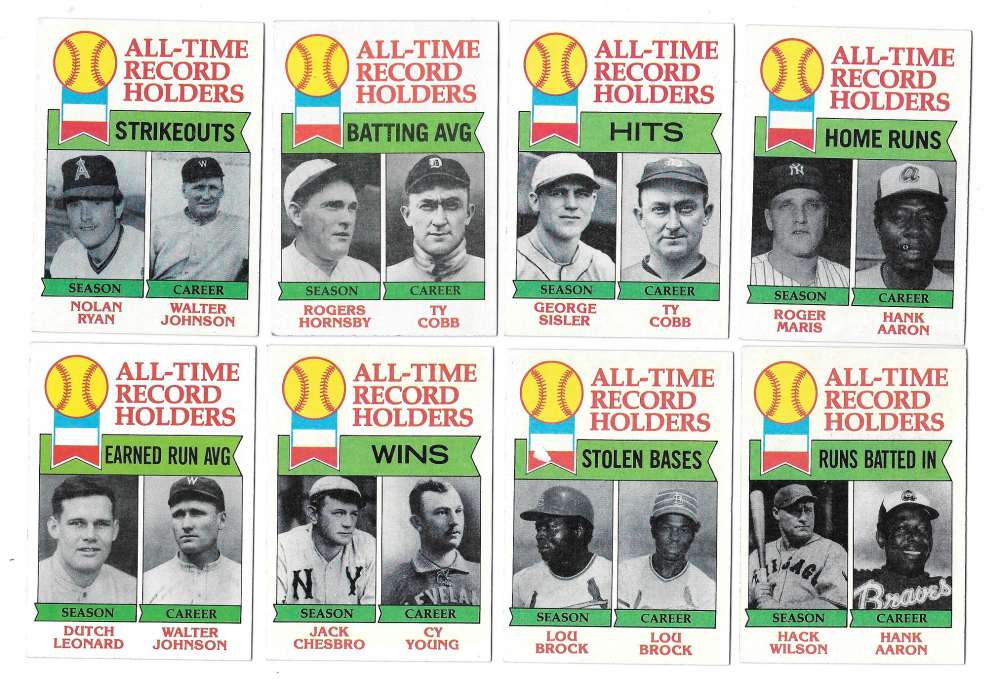 One effect these cards had on me was the immediate elevation of Nolan Ryan and Lou Brock, the only active players featured, to legendary status. The other links to history in this set were the six Record Breaker cards. A few of the records described felt a bit ordinary (see if you can remember what records Mike Edwards, Sammy Stewart, and John Stearns hold/held), but three of them were monumental–

My only quibble with the Guidry and Richard cards–still true today–is that I don’t see why the records books even bother to distinguish between righties and lefties. We see it all the time for pitching, and often for home runs. For whatever reason we see it far less often (maybe never) for non-HR batting feats like average, hits, and RBIs.

Whatever my own baseball knowledge, veto power always belonged to Topps. If Topps declared a player an All-Star, so be it. He earned “travel to school in my pocket” status. Naturally, the 1979 Topps All-Star cards included a ton of the obvious choices: Garvey, Carew, Luzinski, Reggie, etc., but there were also some surprise picks as well (e.g., Don Money). As the info is damn near impossible to find anywhere else on the internet, I’ll provide the full roster right here.

If you have keen eyes, you may notice there’s no American League shortstop. This was NOT COOL, Topps! At least until my friends and I figured out there really wasn’t one, the most in demand card of the 1979 Topps set–after Garvey, who was eternally #1–was that AL All-Star SS card that none of us had managed to pull.

You can read about the phantom shortstop and other missing Topps all-stars on the fantastic “When Topps Had (Base) Balls” blog.

Take away the All-Time Record Holders, the Record Breakers, the All-Stars, and the rest of the game’s biggest stars (Parker, Ryan, Seaver, Brock, etc.), and there was still one card–maybe two–near the top of everyone’s want list. It wasn’t a rookie card, it wasn’t a star player, and it wasn’t even a hometown Dodger. Oddly enough, it was a weak-hitting middle infielder for the Blue Jays…I mean Rangers…I mean Blue Jays.

Even the “O.G” collectors in my class, the ones whose cards went as far back as 1975/1976 had never seen anything like it. What was happening, Topps? I can only hope someone got fired over this! (Okay, just kidding about that last part.)

And what was NOT!

In my “Collector Time Machine: 1981” post, I mentioned that nobody cared about rookie cards yet. Even today, this set isn’t considered a hotbed for RCs, with only Ozzie Smith being the only HOF RC and Willie Wilson and Pedro Guerrero residing several notches down from the Wizard. (And of course none of those three players was even good yet.)

The 1979 Topps set overall was an underrated set in my book. Ozzie aside, many collectors tend to dismiss it as a non-event in an otherwise legendary decade. What I’ll close with–at least for the cardboard section of this post–is the handful of cards from it that I really enjoy today. We’ve got two Hall of Famers, a near-HOFer, and one of the most exciting players of the 1980s here, but they all felt like commons out of the pack. Still, today I would put these exact cards up there among the top two or three cards of any of these players.

From Canada to Los Angeles

The rocker Neil Young wasn’t the only one who made the long trip from Canada to L.A. back in the day. Somehow a boatload of O-Pee-Chee trading cards followed the same path. I have no idea how it happened, but one day a friend of mine showed up at school with stacks and stacks of cards that were 1979 Topps but weren’t.

If that was all there was to it, the cards would have been met with a collective yawn. But behold the Pete Rose!

This was incredible to us! On the Phils??? What!?!? It was like Bump Wills but with a sure Hall of Famer (hey, how could we know!). Without a doubt this was now the card we all had to have. (There were several other team-changers such as Rico Carty, Dave Rader, and Pete Broberg, but they were more novelty than must have.)

See you in the funny pages…

This was a great breakup line I remember from the TV show “Cheers.” I think Sam used it on Diane once. Back in 1979 it was where else we went to hang out with our favorite players. To this day, Topps Comics hold up as one of the greatest Topps companion sets ever, and the gum was even fantastic! It was also how I learned the finer points of baseball’s rule book.

Between a fantastic Topps set, some surprise cards from Canada, and these comics, it’s hard to picture a better year for card collecting than 1979. Perhaps the only thing that would have made the year better would have been an AL All-Star shortstop.

One thought on “Collector Time Machine: 1979”